Ciprian is a fighter.

When he was not more than 10 years old, his parents decided to separate from him. They placed him in the care of a family from Vrancea, far from his house in Botoșani. In the new family he was to help with field work and animal care. 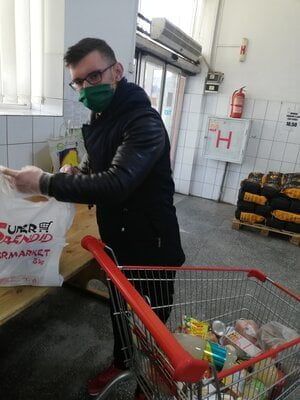 He still has, deep down, the feelings of confusion and despair, of fear and abandonment that pushed him to run away, thinking of returning home. However, the way back was a short one: he was found and interrogated by a police officer and instead of getting home, as he was dreaming of, he arrived at an orphanage in Botoșani.

He is now 22 years old and a very good young man. Because of what happened many years ago, his parents were deprived of their parental rights. Back then he had a hard time understanding why he could not return to them. For years he had to be happy with hearing their voice on the phone from time to time and seeing them when they visited him. He kept in touch with his mother, for whom he has strong feelings of affection.

The years have gone by… he was a diligent student and finished a vocational school, qualifying as a builder/assembler of metal structures.

After leaving state care, he decided that he would not return to live in the village that he had left many years ago. It is not easy for him to lead an independent life, but he has taken his life into his own hands. He attended a security and protection course, thus getting a job in a shop in Dorohoi. He found a rented home, extremely modest, but his salary does not allow him to spend it on anything extra.

Through the independent living programme for young adults, Hope and Homes for Children, with support from NN, helped Ciprian overcome the difficult situation he was in. A first intervention was to equip the rented house with a bed, mattress and basic furniture. Meanwhile, he was helped to pay utilities bills and was provided with basic food items, personal hygiene products and cleaning products. Moreover, the young man received counselling on the management of financial resources.

Eager to continue his professional training, he is convinced that if he has a driver’s license, he will find a better paid job.

NN and Hope and Homes for Children supported him in this endeavour as well. A company from Dorohoi was identified, willing to train him, and all the fees needed for him to attend driving school were paid.

Ciprian looks to the future with optimism. He started driving school in March, but the restrictions caused by the coronavirus pandemic did not allow him to finish it. He also submitted documents to obtain a council flat and hopes that this dream will come true.

New experiences have significantly helped him to develop his independent living skills: he takes care of himself; he is interested in making progress and building his future step by step. We will continue to keep in touch with him and give him the help he needs so that he can have a beautiful life, as carefree as possible.

Through the independent living programme, Hope and Homes for Children helps young people who leave state care, providing them with counselling and material support both to improve their independent living skills and to integrate them on the labour market, through mediation and recommendations.